Skip to content
Posted on July 16, 2010May 21, 2017 by anandgeorgezachariah Posted in PRODUCT PLACEMENT 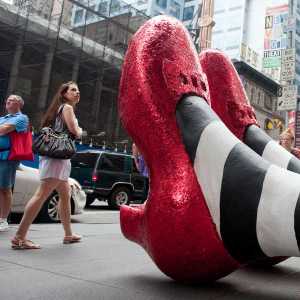 Many messages are thrown at us on a daily basis. But in a movie cinema this is particularly of note because in the dark room with the only light in the room is the one emanating from the screen. It also gets our undivided attention, making product placement oh-so-powerful.

With realism being the new key word, with 3D technology and IMAX making your cinematic experience as real as they come, any underlying/subliminal messaging is magnified manifold. Wonder what 4D cinema is about? Remember those strange setups at theme parks where you were thrust with 3D glasses, and strapped to the chair that moves and swivels, with strange odours and confetti like material flying around; so think ten times as big. With the London Eye already the hub for mainstream 4D cinema since last year, it looks to move elsewhere.

When we talk about the phenomenon of the urban myth; movies take a key place. The above picture is from Madame Tussaud’s New York which gives 4D cinema wings. It depends on perspective and personal experience, when you sit down with your thinking cap and wonder which urban myth Wizard of Oz fulfils. And you can always rework classics can’t you? So there is no dearth of scripts to rework, remake and reduce to ashes (in some cases).

Motion pictures are visual media, they tell their mythic stories through visual symbolism. Myths are stories of our culture; whereas symbols are the way those stories are communicated. 3D has only diluted the urban myth, I would have been happy watching Avatar in 2D, I did in 3D anyways just to figure what the hype was about (No… it was not my first 3D movie). But at times I do take on the herd mentality.

I just wish that the frenzy around 3D would stop, and emphasis be laid on traditional cinema. With that I bow down to Christopher Nolan for not making Inception in 3D. But I shall try a 4D version of an Angelina Jolie movie someday, definitely. I am sorry people for being so confused, am still a little shaken by the 3D version of Alice in Wonderland. I am a confused bloke when it comes to making such life-altering decisions. So 4D anyone? Will 4D further amplify product placement?