Skip to content
Posted on May 20, 2010May 21, 2017 by anandgeorgezachariah Posted in angelina jolie, PRODUCT PLACEMENT 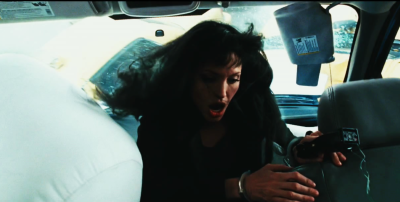 The image of an open-mouthed and handcuffed Angelina Jolie is hard to resist…it’s almost primal quality. O.K! Now to add some perspective to the picture; Angie-baby is also hurtling down the side of a overpass onto a road many feet below with four-unconscious policemen in the Ford SUV with her. Faced with a script that was originally written for a man (Tom Cruise) she is doing all kinds of legwork to technically live up to the challenge chauvinist critics have set for her.

Angelina has proved her mettle in many action-flicks before. One of the few actresses that can toe the line in couture dresses dripping in feminine grace( bee-stung lips included) and smashing villain-skulls, shooting automatic rifles, horse/plane/bike/car-chase sequences, fist fights……

Salt is a movie that only she could have done. She plays a CIA agent by the name Evelyn Salt. None of her contemporaries or predecessors for that matter, have had the luxury of being THE female action star. The success of the film remains to be seen; but since her last action outings Wanted, Mr. and Mrs. Smith and the Lara Croft series (with her name primarily on the marquee) were blockbuster hits; it’s a huge relief.

And it being a Sony Pictures production, they choose to peddle Sony products in the Day X exists game. So far there has been no obvious product placement I could gather from the trailer except for Ford, but then again aren’t all NYC cabs and police vehicles ‘Ford’? :-). And a cigarette brand teases from under Evelyn’s palm.

The marketing strategy has not been very far-reaching though. Many haven’t still heard of the film, with its release around the corner in July. Never has a female-centric movie been done on such a scale, except the Aliens series, I hope to see bigger ‘vehicles’ for Angelina in the future.

Yes, this has all been done before as movie-marketing tools- a game based on a movie, a whole set of social media tools, a YouTube channel, but has it ever been done for a female movie star? The level of engagement in the Dossier Files of Salt is extraordinary. But awareness of its existence should be conveyed to the millions of Angelina fans across the globe. In the game you get updates from Evelyn Salt. Cool huh?

Angelina has therefore paved the way for a lot of women in action roles in the future. Something Scarlett Johansson and almost-clone Megan Fox have been quick to replicate. Angie-baby’s personal PR wizardry is crucial for this film, for the movie to stand out, amidst all the other summer heavy-weights.

To be treated with the same kind of marketing finesse you would dedicate to a Bond film or to Will Smith, puts Angelina right up there. And since the movie technically rests on her statuesque shoulders, she looks likely to bring in a hefty pay package from box-office receipts and Blu-Ray sales. Fingers crossed.