Skip to content
Posted on March 28, 2010May 21, 2017 by anandgeorgezachariah Posted in angelina jolie 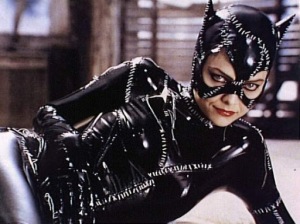 The cat is an animal that strangely is more tied in with us humans than dogs. The cat’s walk has been emulated on fashion ramps. The ancient Egyptians worshipped cats for its fertility and beauty. One might also recall, that one of the Bond Girls in Goldfinger was called Pussy Galore played to perfection by Honor Blackman. Pussy Galore also moonlighted as a trapeze artist with her all-female troupe AbroCATs. By the night, they were well…Cat burglars. Not to sound distasteful but a “pussy” has been a crude euphemism for the vagina, and for someone who isn’t “man” enough. So the character-name with its double entendre was quite controversial. And “feral” and “feline” have been used to describe feisty women.Kitten is used to describe (read young) sexually attractive women, and cougar and puma are used to describe older women who go around with younger men. And with A-list Jennifer Aniston who is making a movie called the Pumas and former Friends co-star Courteney Cox fronting a desperate single-mom-divorcee saga in the TV show Cougar town are definitely not helping the cause. So the cat allusion is going down the (dirty) drain.Popular burlesque pop group the Pussycat Dolls don’t disappoint this trend and hop aboard the feline bandwagon. Not to forget that fur from big cats has been largely coveted and worn the world over for centuries, till laws banning the ‘luxury’ came into force. That was not until half of the cat-species was driven to extinction.

Batman‘s only true love ,delightful con-artist and slippery cat-burglar Catwoman has been an object of fascination for many. Playboy magazine and the new-age anime graphic novels have given this femme fatale gravity defying assets to boot. Many have played her on celluloid. Michelle Pfeiffer, a woman too beautiful to win an Oscar, slipped on the cat suit and morphed instantly into Catwoman. She was not even nominated for her sexy, dark and acrobatic turn in Batman Returns. Even more Oscar worthy was her depiction of the self-loathing and suddenly-very sexy alter-ego Selina Kyle. Even though Michelle turns 52 this year, she can still give any of the new aspirants a run for their money. She should sink her claws into a script as a finely ageing Catwoman who would take on a protégé. We have a plot already. Are you listening Tim Burton? Jessica Beil among others ,is rumoured to be interested in Nolan‘s next Batman with Johnny Depp as the Riddler.One alluring Catwoman was the statuesque Julie Newmar in the cult 1960S Batman series on TV ; which I watched with absolute delight.Can’t say the same about Halle Berry’s disastrous turn in a movie driven by the same name. In my mind Angelina Jolie or Diane Kruger should play Catwoman. Then again Angelina should also slip into Wonderwoman‘s suit and Fox, Elektra, Princess Leia, Supergirl,Lara Croft (again) and Medusa and……..